Yesterday, Dr. Wile E. Coyote and I went and (finally) saw The Guardians of the Galaxy. We were discussing it later (of course), and agreed that we like other Marvel movies better. I really like all the Avengers movies. But Guardians tied that in nicely (that is one of my favorite things about Marvel—everything somehow connects!). Anyhoo, I realized that my favorite part of those movies is watching characters grow and develop.

[NOTE: If you haven’t seen Guardians of the Galaxy yet and want to, stop reading. Otherwise, continue.] 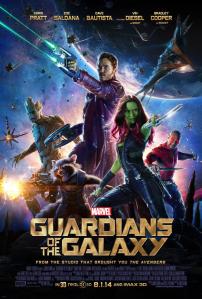 Each of the five characters who breaks out of prison, Rocket, Groot, Gamora, Peter, and Drax, grow at some point during the movie.

Groot is the “muscle” of the Rocket-Groot partnership. It’s just he and Rocket. Until they find friends. He begins to grow when he is speaking with Rocket, not about to let their friends just be taken. It is evident when Groot grows his branches around his friends to protect them and utters the words, “We are Groot.” Ugh, my heart freaked out about that. It was so touching! But I knew he’d grow back.

Drax was like one of those always-angry bullies, willing to do whatever it took to “get even.” Drax grew when he told Groot that he had been letting his anger control him—he realized it. Yes, he’d lost. They all had. And it made him more empathetic to the others who had lost much, also.

Rocket was like one of those bullies who you’re not exactly sure that he’s a bully, but he pulls all sorts of stuff on others and is super smart. He DID return to help his friends, which was a big step for him (even though out of everyone, he was the most hesitant). Rocket grew when he was sitting in the midst of Groot’s sticks. Groot had been his only friend. But when Drax comes and pets him, Rocket relaxes. He has lost, but he still has friends!

At the very beginning, we meet Peter Quill as a boy, right until we see him be abducted by a UFO. He protects himself because he doesn’t want to get hurt. He didn’t reach for his mother’s hand, because it might hurt, and he hears her die instead of watching it. He doesn’t stay close to anyone, not even the “family” of men who had abducted him and basically raised him. But he is willing to help Nova, especially when he sees Gamora’s heart to save it. He DOES want to help. We see Quill’s growing toward the end when he holds the stone and reaches for Gamora’s hand, too. At the very end, he opens the package from his mother that he’d been hanging onto for 26 years, because he can finally move on.

These five, who had escaped prison, save Nova. Their hearts have turned around. The five, who hated each other, are now good friends who stand up for each other.

Watching characters grow is one of my favorite parts of a story. This Saturday (today), on this day that I have nine hours to myself (because Dr. Coyote is in the library), I have been working on writing and fixing spots in my story that I’ve been looking at for too long. Maybe it’s time to take a new approach. How are my characters growing? Can I see them all grow? Or do they stay the same?

What do you look for to know if a character is strong or weak? What else could I look at besides character growth? What do you like to see in characters?

2 thoughts on “Character Development: Looking at Guardians of the Galaxy”