A year ago, I was just getting strong enough and able to take care of myself again after living with my parents for three months. After that, I could move back home with my husband in Kentucky. We (Doug) moved into a one story house and had made sure it was  handicap accessible before I got back. Pregnancy plus multiple sclerosis (MS) is ideally supposed to help the MS, even though it’s not on meds. Well, as I learned (even though I almost already knew), I am an exceptional case. Without meds, the MS in my body was pretty terrible. I’d gone without meds for a few years right after I was diagnosed with MS, until we found a drug that worked. For the first time in ten years, I was going MS-med-free, and it seemed to be going the same way. I would get an infection, and it would trigger a relapse. New lesions appeared in my brain during pregnancy. The day after I gave birth, I tried a new med that’s supposed to help patients with MS, too (not that it’s been researched tons yet). And although new lesions didn’t appear in my brain, the weakness was still pretty terrible.

In October, I was hospitalized when I became septic with a bladder, kidney, and blood infection all at once. When I get sick, I usually lose all strength in my body. After I was discharged (and stronger because antibiotics were helping me), I started some home health physical therapy (PT) in November. In January, I started up on outpatient PT, starting at the strongest I had ever been than working with that particular PTist, Judy. (She’d worked with me when I was pregnant, too.) I told Judy the first day I saw her that I wanted to ditch the walker. And pretty soon I was walking with two arm canes, and now, if I walk with an arm cane, I only use one! I still use my walker when I’m real tired, but those times are limited. (Yay!) Then, I started up on this walking machine thing called the Lokomat. 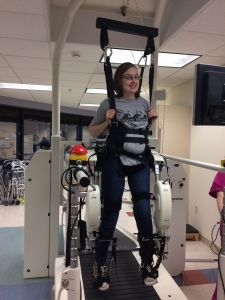 Basically, I go through the motions of walking, with about 50% of the effort on me. I also am not bearing any weight. For the first time in years, I don’t have to use most all my muscles to activate a weak one. The longest I have gone is for 30 minutes (as of April 3). This has also helped me with my stability! For the first time since January 2016, I have been able to stand for a whole shower, instead of needing a shower bench to sit on part way (or the whole way) through.

We have hired help at home (my caretaker/nanny) that helps me take care of my little girl, as I still can’t transfer her well or really walk with her yet. Whoever is there is also my hands and feet, as I still get tired pretty easily by running around or lifting things. And I call it “supervision” of me to make sure I don’t do something I probably shouldn’t be doing. They’ve been with me since Lydia was three weeks old, and in that time, I have better learned to ask for help when I need it. (Um, Lydia is now seven months old. SEVEN! Next thing I know, she’ll be off to school!? Lol.) Amanda, the gal who comes to our house to help me out that’s closest to my age, has become a dear friend of mine. I guess that longing for a friend to just sit and have coffee with I’ve had for years has finally been fulfilled!

So, I’m making a ton of progress. And, we just found out that after more than a MONTH, the only MS med that has ever really worked for me has FINALLY been cleared by my new insurance company, so I can start taking that again! I can’t even imagine my improvements after that starts! But don’t worry, I’ll keep ya’ll updated. 😀

Hugs, everyone! (Even if I don’t know you, I’m gonna send you a hug. I like hugs, and I’m excited about this stuff.)

One thought on “An Update on My Physical Abilities”